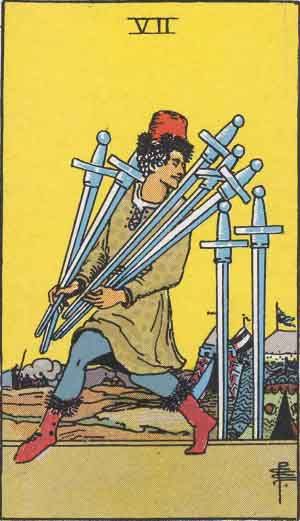 The man in the Seven of Swords card appears to be making a game out of gathering swords. This is a card that is often called the ‘coup’ card when something is done suddenly for the sake of power or protection.

Someone believes another will harm or leave them so they take the sting out of the imagined opposition by being the first to strike or leave. This is not a sound foundation for building relationships, and if you are feeling lonely then recognize the part you have played in your own demise.

Swords seem to embroil conflict, so the Seven of Swords can show a sour attitude of coming from scarcity with a sense of neediness. If we believe life is so difficult that we must push our way aggressively into the world we will meet a path of many battles.

In relationships, the Seven of Swords may show an imbalance where one party is manipulating the other. You may decide that it is time to leave a group that no longer shares your ideals. It is also possible that rumors and back stabbing are taking place so choose your friends wisely.

On a positive note, the man seems quite pleased with himself so in a difficult situation a quick and decisive move can bring you to safety.

Keywords: The need to consider your own needs rather than another’s. Rash decisions that impact others adversely. Breaking free, doing things your own way and abandoning group ideals. Thinking and acting quickly to save yourself from danger. Theft and back stabbing. A coup that takes the sting out of opposition.

Reversed: Dishonesty and a lack of conscience. Not listening to advice or warnings leaves on susceptible. Scams and deceit. Poor planning and rash decisions. Behavior that alienates others. Excuses instead of just doing the work.