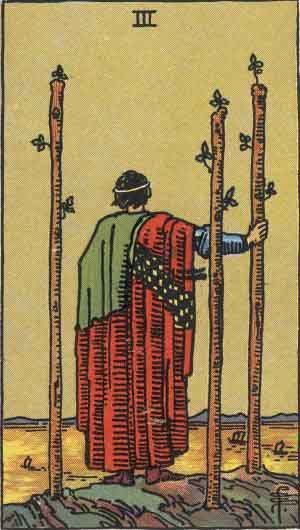 The number 3 in dreams suggests a turning point or the need to take two opposing ideas and merge them into a third transcendental product. We can be caught up in an ‘either/or’ choice, but might be able to have it all if we consider an aspect that we hadn’t previously acknowledged by blending the two choices.

The Three of Wands has taken the exploration of new opportunity in the Two of Wands to the next level. Now there are two wands firmly planted as a man stands on a plateau studying the future, while holding onto a third wand. He may be examining foreign landscapes and other opportunities for commerce and trade.

In relationships, the Three of Wands can show distance when lovers are living far from each other. Someone has made a decision and is now awaiting the outcome.

When the Three of Wands appears, the meaning is positive and success is on the horizon. Perhaps you are waiting to hear back on an idea or invitation that you communicated to someone. Because the man is standing alone focusing on new horizons, the message can relate to finding the strength to leave a difficult situation in search of something more realistic or fulfilling.

There is passion in Wands that always involves ensuring that you are fulfilled and not sacrificing your needs in an unhealthy way. You’ve expressed your desire or made your move and now need only wait to see the result.

The expansive nature of the Three of Wands suggests movement in some form that supports your outlook. It can also refer to establishing boundaries that allow you to create a larger world for yourself.

Keywords: Holding onto what has already been built or accomplished while exploring new avenues. Optimism and expansion. Travel. Establishing boundaries.