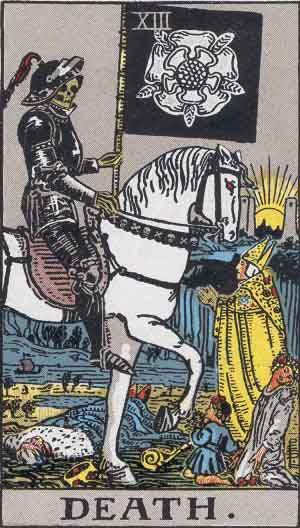 Death can best be understood when comparing it to the I Ching hexagram Standstill. In nature, nothing comes to a standstill and when obstacles appear they are no match for nature’s power to tear them down. The ideas we create in our mind are no different and must undergo release and renewal.

In ancient times, people worshipped the snake as an Archetype of yearly death and regeneration. In all cultures, snakes were observed to go below the earth and come back out, casting their old skin aside. When the ancients observed lightning patterns, they believed the snake had resurrected itself to fly across the sky. The feathered serpents of antiquity remind us of the power and necessity of deep and continual transformation.

The message of Death is often about letting the past go and opening yourself to rebirth. In the card image, the priest, the student, the child, the old man – all are powerless in the face of that which tears the old life down. There is always an element revealed by our Archetypes that remind us that life is a process of birth, death and rebirth. We see this in Shiva the Destroyer or in the way Yahweh reminds Job that we are no match for the power of life to weed away weakness by evolving it into strength.

Of course, we will all die one day, but that is not the message that Death offers. All of our life, we will have tiny little deaths and associated rebirths.

People are often puzzled when they have dreams about people dying. Sometimes the dreamer dies or faces the threat of death with absolute fearlessness. The message of this type of dream merely shows that a part of us is passing away. If we dream of the death of a parent, perhaps their conditioning is passing away. Other people in dreams are always portraying elements that we associate with them which we are examining, adopting or discarding.

Often dreams of Death are followed by dreaming of an Unknown Child. This new Archetype portrays the emerging side of us of which we are unfamiliar, yet requires nurturing. Just as nightmares are a positive sign that emerging power is being released in the psyche, one should not be fearful of receiving Death in a Tarot reading.

There are no bad dreams and no bad oracle cards, only snapshots of where we stand in our evolutionary journey toward authenticity. When Death appears, a healing and a release is in order. It is not easy to admit that an old way is no longer working, but the sooner you admit this, the sooner you can move toward a more fulfilling life.

Keywords: A transformative event that alters your course. A willingness to let the past go and move on. The necessary conclusion that leads to a rebirth. Allowing outmoded ideas to be transformed to expand consciousness.

Reversed: Not admitting that it is time to make a change. Facing difficulty with fear. Not seeing the reason for a change in current situation. Resisting change. The light at the end of the tunnel.