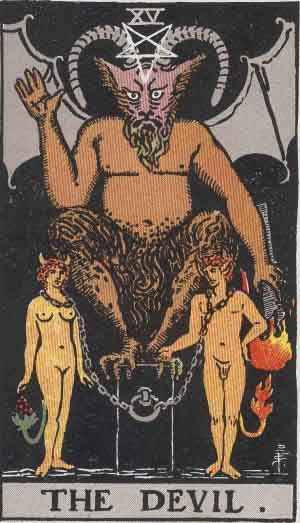 The Devil archetype is not what it seems. In the East the word for a divinity is Devi. Many religions are based on the Old Testament from the Hebrew Tanakh. The first time the Devil is mentioned is in the book of Job, a story about a man from Uz, probably of Sumerian origin and possibly non Hebrew. Yet the word satan is a Hebrew word translated as ‘any adversary.’

When Job is suffering, he basically asks who is my adversary and why is he punishing me? The word satan was then translated into Christian and Islamic texts as Devil or as an evil and fallen angel out to punish mankind.

Another reference to the Devil is Lucifer in the book of Isaiah when he compares an ancient king to the Morning or Evening star which we now call Venus. Lucifer, bearer of light as the planet Venus, rises in the morning before the sun and was believed to be an imposter of the sun. So when Isaiah says “Lucifer who has fallen” he is referring to how Venus disappears below the earth for extended periods and how the king is an imposter. There is no Devil in the Hebrew text.

The idea of the Devil comes from Zoroastrian myths describing a benevolent and an evil aspect of divinity. Today, we understand this like the Trimurti of Hindu stories, which traveled with the Aryans from the Persian steppes. Life contains both a generative and destructive power of chaos, order and chaos again, that drives evolution.

Since most of our beliefs are intertwined through cross pollination, we can’t discover the truth unless we look deep into our ancient records. In the Mayan world, Venus is called Kukulkan or the Feathered Serpent who lives in the underworld for periods and then flies through the sky. In Greek literature, the planet Venus is associated with Demeter and the story of Persephone being held prisoner in the underworld during winter. This underworld is the archetype of the unconscious and its power to overrun our lives.

So when the Devil appears in a reading, you may be experiencing the same misconceptions and negative energy that disempower a group of people to bewail their fate and play the victim card. There may be obsessions and addictions at play, but they are well within your power to control. Of course, a little digging may be necessary to confront your projections and release them.

The Devil can also portray the same type of energy that appears in dreams of reptiles. These symbols represent the fight or flight response, sexual urges and autonomous energy that feels beyond our power to control. Sometimes we need to open to our wild and untamed sexual nature. Other times we might identify stifling situations which have left us powerless.

There is Shadow work necessary in learning how to observe your projections and own your fears. The message is that your motivation may have run away with you and can lead you deeper into a disconnect with the joy of living.

You can explore Shadow as a symbol in our Dream Dictionary. Similar to the I Ching hexagram Coming to Meet, a situation is highly charged with compulsions and misconceptions that have led you to become lost.

When the Devil appears in a reading, it is the darker side of the Trickster Archetype portrayed by the Fool. The freedom to embark into the unknown has become repressed by irrational fears. But nothing bad is happening, it is merely the inability to recognize your compulsions.

The Devil can show the misplaced energy of renewal stuffed in a closet by the Hierophant. We may meet it again as the Tower, unless we take active steps to free ourselves from the illusion of being trapped.

There is nothing really to be feared except how fear is holding you in an unnatural condition.

Keywords: Addictions and obsessions. Bondage or feeling trapped in an unhealthy lifestyle. The need to bring repressed urges out into the open. Animal appetites which can be healing. Not knowing when to say ‘no.’ A trickster or upsetting person who makes you face your illogical and irrational ideas.

Reversed: Allowing other's to make you feel you are trapped in an unhealthy situation. Your own fear is causing disempowerment and a sense of unhappiness. Empowerment and taking back control of your life. Freeing oneself from an abusive relationship or recognizing that the situation is not as bad as it seems. Feeling victimized when we have the power to change our thoughts.