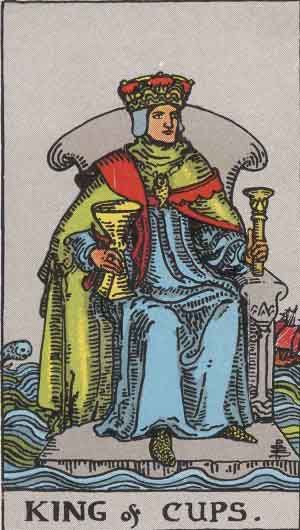 It is hard to say which of the Kings present a better father image, but if you had the opportunity to grow up in a house run by the King of Cups you know the value of feeling loved.

Perhaps you are from a musical family and can still play the piano from the lessons forced on you as a child. This is not the military (swords), material (pentacles) or entrepreneurial (wands) man. This is the soft teddy bear type, who is the picture of generosity.

For an artist, the appearance of the King of Cups can be a message about taking your craft to the highest level and making a real living off of it. As an employer, the King of Cups is more interested in the culture of the office, which he believes creates success. Happy employees make happy customers.

He can be a bit of a wheeler dealer or risk taker but he enjoys blending the spiritual path with the work environment. He has an optimistic faith that creates an environment of growth for everyone. He is never too busy not to hear and always has his door open. The empire he builds is built upon strong relationships.

He is not always successful and can represent the struggling artist who believes a dedication to the truth of art is more important than selling out for public consumption. The King of Cups can be the stay at home father with a provider wife. He may have a dream of success that he works on daily and enjoys it, whether or not it ever leads to anything tangible.

He can be the most calming and reassuring individual, regardless of what is going on in his world. He seems to operate in a different frequency than most people. Unlike the doctor presented by the King of Swords, the King of Cups can be an alternative healer. Since the Cups are associated with emotion and the King is the master of the suit, the appearance of the King of Cups can be a message to get your drama show under control.

Of course, like all creative individuals, the King of Cups can put on a few drama operas of his own. Whether he is representing someone in your life or a message about you, composing emotions so that they are sensory rather than outbursts is always a good thing.

Emotions show how we feel and provide feedback, so that we can tweak our response. If every day, we are exploding in anger or allowing our emotions to run away with us the King of Cups will remind us that something is out of whack.

He holds his cups with his toe in the water, but he appears very centered and looks out into the world. Where the Queen of Cups stairs into her cup, showing how the imagination can take on a life of its own, the King of Cups is a master in the creative world. He balances between how an artist needs to let go to create - but keep one foot on solid ground.

The King of Cups is always a good card to receive in relationship readings because of his association with the highest expression of love. He can portray you as the artist and the idea of arrival. Good feelings generally flow when the King of Cups appears.

Keywords: A genuine fatherly influence of caring kindness and unconditional love. A business man who instills trust or inspires motivation in those he leads. An accomplished or gifted artist. Making a generous income from art or creativity. An alternative healing treatment. Remaining calm in the face of chaos. Deep wisdom and gut instincts. A degree or certificate in alternative medicine, spiritual healing or art. Initiation into unconditional love.

Reversed: An immature and overly emotional male. Bitterness and the need to heal and forgive. A person cut off from emotions who resorts to instant gratification. Drug or alcohol abuse. Not facing reality and living too much in fantasy. Escapism. Not completing what you start. Creative block.