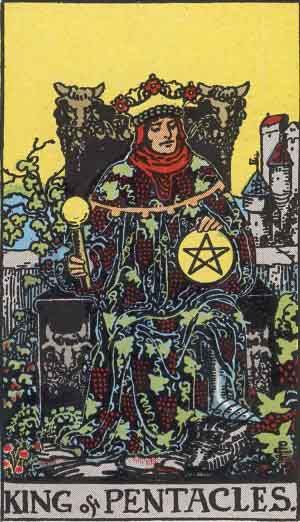 Each of the Kings shows mastery of the suit. The King of Wands is often a salesman or entrepreneur, while the King of Swords holds a license or degree to practice. The King of Cups is usually an accomplished artist while the King of Pentacles is someone who truly understands the value of hard work. He can portray a boss who is focused on results and not necessarily interested in hearing about the tasks you completed.

This can be a no nonsense man who may read the Wall Street Journal at breakfast before going to the empire he built from scratch. He is successful and often the ‘sugar daddy’ of the deck because of the comfortable and exciting life he enjoys and willingly shares.

As a father figure or boss, the King of Pentacles is focused on the bottom line while rarely missing any small detail at all levels of the business. He never forgets the hard work and dedication he exhibited in achieving success and expects the same of others.

The King of Pentacles can symbolize a workaholic. In relationships, he is the provider and would have a hard time playing any other role. Unless he feels successful in business he cannot enjoy other aspects of life.

As a message, the King of Pentacles shows a period of success or acknowledgement where finances improve considerably. Whatever you are attempting will be measured against some sort of bottom line.

He can appear after a difficult period of work when you are finally at the top of your game. What he lacks in emotional exuberance he makes up for in taking you on exotic trips to foreign places. He isn’t stingy like the Knight of Pentacles because he has achieved a level of success that gives him confidence.

Keywords: A stable and successful role model or mentor. Reaping the rewards of speculation or expansion in business. Obtaining diplomas, degrees or titles that offer respect. A fatherly influence focused on business and success. A savvy business person with a calm demeanor. A self made man who encourages your success. Sound financial advice. Success in business.

Reversed: A swindler or being focused on money with no ethical conscience. Financial outlook taking a turn for the worst. The ill side of greed and wealth makes one possessive and money grabbing.