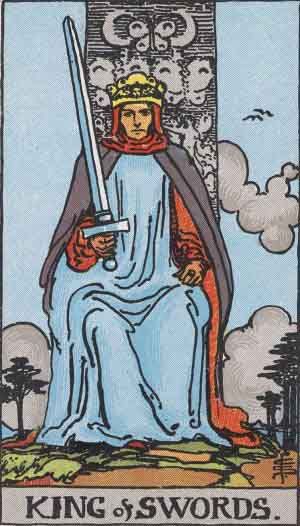 The King of Swords is the doctor, lawyer or other professional who has many years of education behind his degree to practice. He can appear whenever you may need to consult a doctor or lawyer. He can also be the military father who made it difficult for you to express your emotions. As a disciplinarian, emotional expression wasn't important.

As a boss or father figure, he operates in the realm of intellect and has a difficult time with emotional displays. As a companion, he can be witty and extremely intelligent, although he may not be all that demonstrative of affection.

The King of Swords will appear if you are considering an educational path that will take many years. He can pop up when you finally receive your degree and are ready to practice. He can be the scientist who is uncomfortable in a social setting.

In relationships, he can portray the partner or the influence of a strict father who inhibits a partner’s ability to express emotions. The self sufficiency of the King of Swords can make him aloof or disinterested in social banter.

The King of Swords often appears when the truth takes precedence over all else. While the swords bring varying levels of this idea forward - the King ensures that the message is loud and clear: pull your head out of the clouds and take the necessary action that will ensure your success.

Keywords: An educated man with a degree or license to practice. Lawyer, doctor, professor or military man. Harsh or cold paternal influence who doesn’t value emotions. The advice of a boss or authority figure enabling you to see the truth. Blind justice, law, ideas and concepts taking precedence over emotions and intimacy. A harsh but effective leader.

Reversed: A hypercritical, ruthless and cold man. A controlling and sadistic bully or tyrant. A man who sows strife for amusement. Fault finding in an abusive way. An inability to achieve intimacy keeps one attracting non committal mates.