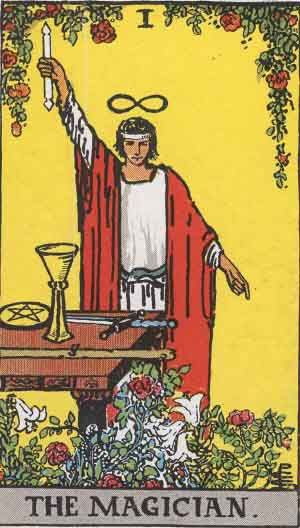 The Magician derives from the word Magi and while we associate it with witches and sorcery, it is actually more closely aligned with Shamans or spiritual leaders with the gift of second sight.

The characters or Magi from the story of the Three Wise Men were Zoroastrian priests and astrologers. They read the night sky like a glowing cuneiform text to understand events that would happen on the earth. Their work has lasted over the millennia. The Magician appears in a reading when you are exploring becoming a master of something.

Most people don’t realize that Abraham and even Moses were Chaldean Magi. During the Exodus there is a reference to the brass serpent Nehushtan, a symbol of regenerative power of ancient times and that God told Moses to make it. This snake is the inspiration for the Caduceus as a symbol of medicine.

There is great power and healing associated with the Magician that calls for renewal and empowerment. Whatever is unfolding is always linked to intention and when the Magician appears, you are asked to consider this as a way of understanding manifestation.

In mundane terms, it can show the power to climb the corporate ladder because of skill and the ability to adapt to challenges. It is associated with the planet Mercury which has similar symbolism of dexterity, mental clarity and great skill. He has all of the suit symbols around him - and has mastered all realms to arrive where he is.

The pentacle, sword and cup are on his workbench, showing how discipline, clarity and creativity were applied toward his success. He holds the wand toward the sky, with the infinity sign above his head. The card captures Chuang Tzu's idea of "identify with the infinite and wander in the unfathomable." Wonder is an important aspect of living a fulfilling life.

The Fool opened the door to wonder - but the Magician has mastered second sight. He can see both the world of the mundane and the possibilities that brought it into existence. In this way, he epitomizes the art of manifestation.

The Magician shows sales potential at its highest form as a master negotiator. Communication is highlighted and you are asked to develop your inborn skills in order to become a master.

As a person in your life, they are crafty and probably one step ahead of you, always keeping you on your toes. At this time you need to acknowledge your talents and find a way to use them in work so that you achieve the truest form of fulfillment.

There will never be anyone like you and only you know what it means to be fearlessly yourself. Life is not a dress rehearsal, the time is now to manifest your dream. The Magician is asking you to recognize your unique gifts so you can apply them.

Keywords: Being at the top of your game. Power, skill and careful concentration. Taking initiative and being resourceful. Mastering negotiation skills. Being the ‘go to’ person or labeled the problem solver at work. Taking your career to the next level.

Reversed: Not acknowledging greater capabilities. Waste of skill and talent. Jack of all trades, master of none. Poor planning or research. Being swindled by a clever person.