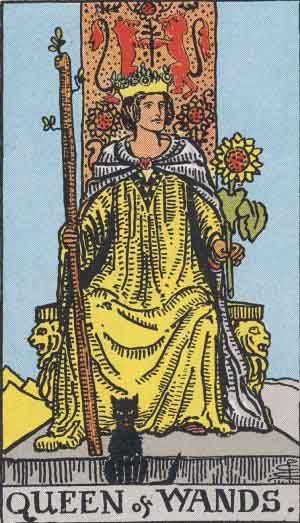 The Queen of Wands is an outgoing, social woman with an entrepreneurial spirit, brimming with enthusiasm. She can portray these aspects that you might develop or can represent a woman in your life who inspires you.

Since Wands are associated with ideas, the Queen of Wands can be a master of social media or information sharing. She has taken the idea of art and social exchange to its highest level and appreciates the reward of networking and sharing ideas. Wands relate to the Fire signs of the Zodiac: Aries, Leo and Sagittarius. They excel in sales and marketing. The Queen combines a sense of arrival and comfort because of applying new ideas.

If you have gone through a reflective period, the appearance of the Queen of Wands can be a message to become more social. In a relationship, the Queen of Wands can represent a woman who is hard to pin down because she is open to many opportunities at once. She can have difficulty making a commitment to just one mate or one course of action.

The Queen of Wands can have just as many male friends as she does female friends which can be unsettling for a possessive partner. She loves football games and sports and believes a woman can do everything a man can do. What she lacks in making a commitment she makes up for in the easy way she is non demanding.

She is a woman who is perfectly centered in who she is and doesn’t require a lot of stroking. The Queen of Wands is always socializing and likes to have a busy social schedule. She can wear out a partner who would rather stay at home, so if networking and making new friends isn’t your cup of tea you may want to look for more of a homebody.

She is amusing, elegant and earthy. She can look just as sexy in a t shirt or in a black strappy dress. She is the perfect gal pal with an easy going demeanor.

Keywords: A popular woman brimming with confidence. A woman who is the life of the party and very sociable. A business woman who inspires confidence in those she leads. Sales ability and leadership in social media. A motherly figure who is cheerful and optimistic. Dynamic and independent.

Reversed: Ideas that change from inspiration to manipulation because one lacks confidence in a social setting. An aggressive light haired woman who wants to win at all costs and can become bitter when defeated. A lack of self esteem. Self centered, sarcastic and disloyal. Spoiled behavior. Self righteous and alienating approach.