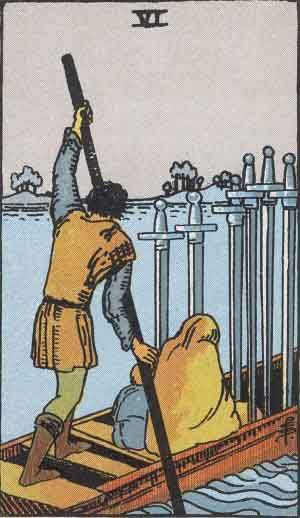 The woman in the Six of Swords card seems to have packed up everything she owns to travel toward a better life for herself. This is a gate card and so the meanings can be many. It brings up the idea of making a sacrifice for something better.

Most often the Six of Swords shows moving from difficulty into calmer surroundings. In relationships we sometimes must abandon hope of ever getting what we desire and move somewhere else. She is taking a child with her, which can mean there will always be ties to what she is leaving behind.

She may be taking the belief in her creative abilities and leaving the daily grind behind. Sometimes the Six of Swords can show the emotional difficulty that precedes a deeper commitment and the card can be a declaration of love or commitment. In all cases, the difficulty is behind her as the choppy waters are only on one side of the boat while she is taken to calmer waters.

In dreams, water represents emotion, so this card often appears in highly charged emotional relationships. There is a definite sense of movement which can be away from ego toward guidance of a spiritual nature. All that she has known is left behind as she travels toward her new life.

Sometimes people run away from relationships specifically because they are afraid of the emotional stirrings they feel. The only clear message of this card is that an old way of being will be transformed into something calmer and more fulfilling.

Keywords: Grieving and moving to a new place in search of peace and a better life. The promise of light at the end of the tunnel. Hitting bottom but finding an improvement in circumstances. Healing and taking a chance on an unknown future. Calmer waters ahead. A message to move on or let go. Commitment and declaration of love. Running from love.

Reversed: Staying in an unhealthy relationship. Returning to try one more time. Failing to go leads to shame and depression. Disrupted travel plans. Returning home urgently. Stuck in a trap of manipulation. Movement that involves facing crisis or sorting out difficulties.