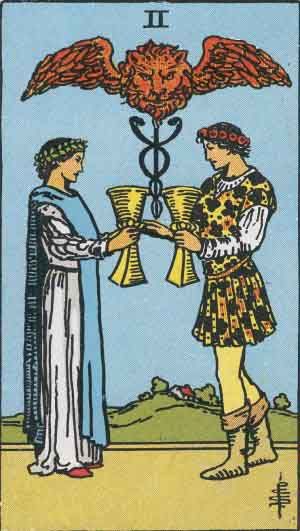 The Two of Cups focuses on choices or partnerships. The symbolism of Two in a dream often shows making a choice and cups relate to emotions. It can appear when you are choosing between two possible mates. Next to the Lover card, this would be the second best card to receive in a relationship reading because it portrays commitment.

The Two of Cups can appear when you are exploring any type of partnership because it reveals how all parties are in agreement and are in for the long term. This card can appear when a marriage proposal is coming. If you have recently met someone, this card can symbolize the way you fall under each other’s spell. It captures that aspect of attraction that can become consuming where you can’t think about anything else.

Because the Two of Cups is also a choice card it can show that there is definite interest but the relationship is still being explored for its viability. Regardless, this is a positive card when romance is blossoming. If you are asking about another’s feelings, the Two of Cups would show that the feelings are mutual.

Keywords: True love or a commitment to love. A partnership or close friendship of equals. Relationship success from a strong foundation of mutual respect. Engagement, commitment and marriage proposal.

Reversed: Unhappy couple or a hot/cold relationship. A lack of commitment that sours a relationship. A partnership that is ending. Divorce, incompatibility or irreconcilable differences.