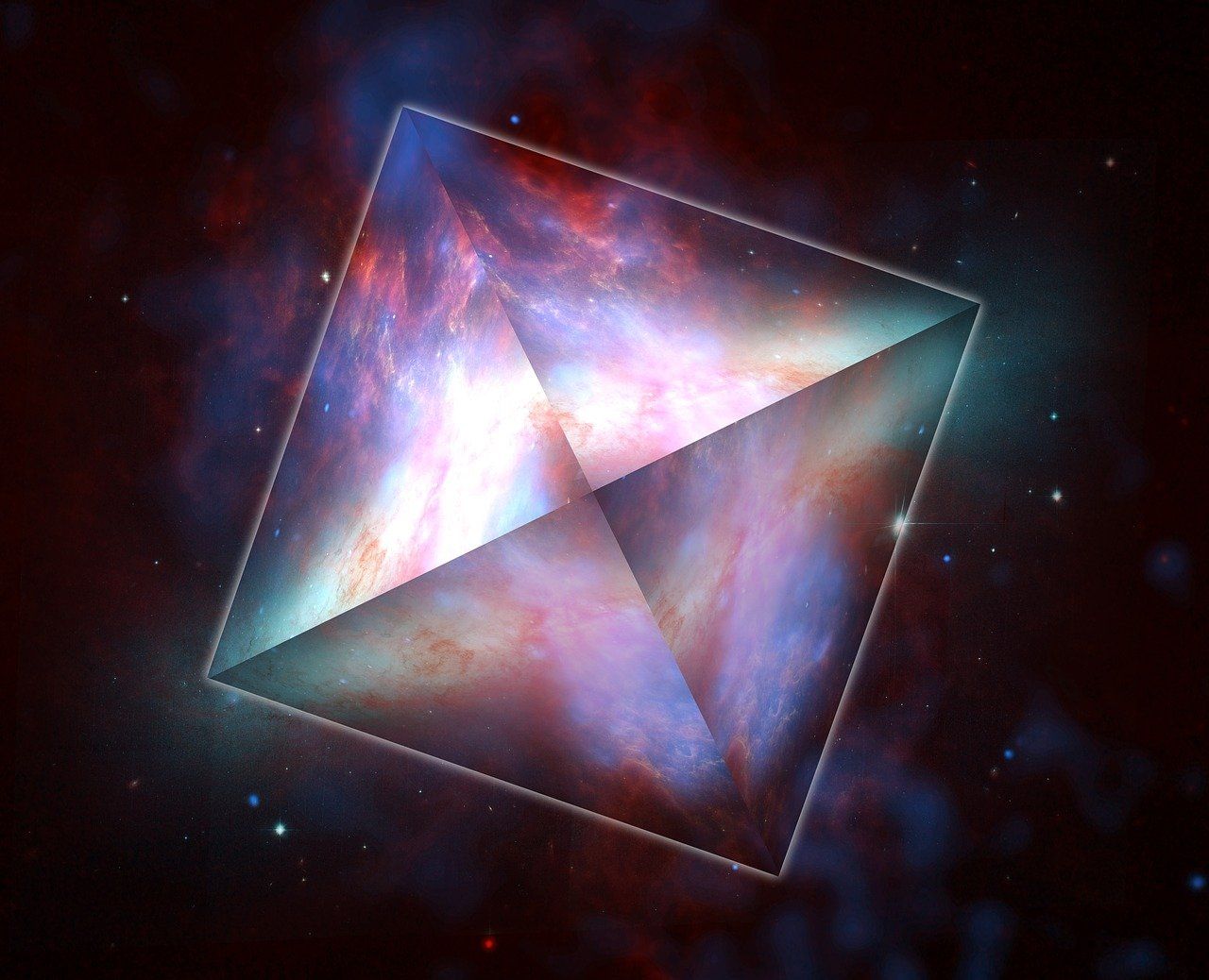 The Greek philosopher, Heraclitus said "Nature Loves to Hide." Since he was a master of paradoxes, a better translation of Φύσις κρύπτεσθαι φιλεῖ might be that concealment and discovery are somehow connected, and behave like curious companions.

Like a koan or riddle, concealment leads the seeker to unravel truths that engage profound realizations – more than what can be conveyed by a direct answer.

Whether human nature, or nature itself, to the early philosophers, life’s inner-workings remained undetectable to human senses and reason.

Little has changed over the centuries. Acting like particles and at other times, waves – scientists still struggle to understand nature’s paradoxical behavior. Whatever ‘it’ is – we try to define it with our singular ideas. But nature seems to hide in its duality.

Resembling the Zen master’s puzzle that can reveal the mind’s limitations, how can something exist in two states at once? An example is how a river can both flow and rest in a perpetual state of flux, or how fire only exists while it is changing. In its ceaseless movement, we see how nature exists as change, and how change is its only constant.

The idea that we might capture it – with the butterfly net of the mind – sweeps us back into life’s endless flow of change.

And the mind certainly can’t be trusted. It hides the truth even from itself. Dreaming allows the soul to see its own reflection beyond the mind’s peculiar amnesia.

The mind relies on the senses to detect information. But if each creature’s senses are different, attuned to what ensures their survival, what reality exists when not left to the fragmented and limited view of the senses? The mind receives, interprets and therefore, creates what it believes exists.

Just because something ‘appears’ a certain way, in no way defines nature.

The ancient philosophers believed that since nature concealed her knowledge from our coarse senses, her mysteries were better revealed under the veil of allegory and myth. Just as a dream symbol is not created nor deciphered with the eye – perception and thought required something abstract – a mediator - something more transcendental to arrive at understanding.

And who needs a body? We dream with the eyes closed – with no sensory input, and yet, experience something that feels incredibly real.

As another of nature’s paradoxes, we call the dreaming mind fantasy, but the soul has a more accurate view of itself in this condition. In this way, phantasiai could be used to aid reason in gaining access to transcendent ideas.

Like dreams, artists and musicians engage imagination as a mediator – and stir the soul to awaken it to its existence. Capturing life in a more transcendent state, they mirror something that speaks to the deeper part of us. Actors too, are its psychopomps, engaging phantasiai to free the one held captive by the mind.

This is the power of our ancient myths and archetypes. Our myths describe a beginning where chaos, or the formless, existed in a state of unity. Heaven and earth were undivided, and the introduction of fire or light orchestrated a process that changed original chaos into life as we know it today.

Scientists too, describe a universe that emerged from the explosion of a singularity, the unity of all forces broken by the Big Bang. We think of it as an explosion, but it is really an expansion.

From every point in Space, the universe is expanding in every direction. All around us, life is growing and evolving into new and unique variations.

Since the beginning, this story of abundance hasn’t changed.

When we consider that half of life is spent in the dream state, deciphering the true nature of consciousness would only solve half of the puzzle. Either way, we find the same artist painting its image on the palette of the mind – whether through dreams or actual experience.

Rather than shaping nature in our image, who are we when we look into nature’s mirror? The mind is expanding like the universe, with neural signals flashing like stars. In here – out there – no longer separated by duality.

From the mirror of nature, we see how artists add dimension to intensify the expression of meaning. They juxtapose dark and light, contrasting warm and cool colors, different mediums of hard and soft textures, color opposites, or even by incorporating subject matter that brings together extreme ideas.

Like the Big Bang, contrast makes the singular – multi-dimensional.

When we encounter these contrast patterns in life, we call it crisis or conflict. Yet, contrast is the dimension needed for life’s expansion. It is how disunity and unity rest in a state of flux.

In both photography and human vision, contrast is what allows the degree of differences to take form as an image in our mind. Whether real, imagined, heard as words, or encountered in the dream state, images form in the mirror of the mind and become the story we tell ourselves.

The human brain has its own way of organizing what we see in the world around us. Having two eyes allows us to perceive motion in depth, the meaning of dimension.

This video demonstrates how the mind can arrive at incorrect assumptions:

In these optical illusions, we observe the brain having difficulty establishing what it actually sees. The last two images are not animations, and yet we see dots appearing and disappearing in flashes.

The eyes transfer information to the brain, but the brain can't see. The brain can 'fill in the blanks,’ and arrive at conclusions that aren't accurate. Our visual system was developed to help us respond more to the edges of a surface for survival. Additionally, the threat of movement can put the brain on high alert.

Emptiness is the Source of all Being

In the abyss or emptiness that preceded creation, we see how ‘emptiness is the source of all being.’ Literally yes, but our attempts to grasp life’s fluidity as something static can transform a sense of being into repetitive patterns of doing. When we empty the mind of its expectations and drudgery, by simply being, we return to life's expansion.

With only light, we experience a multi-dimensional space of vivid color and textures. What we make of it is a creation in the mind. Perception and imagination intertwine - so we can see our fears, our beliefs, and how what we think we experience reinforces our ideas.

And when we measure the universe, matter represents less than 5% of its total density. Another 20-25% consists of undiscovered but detectable dark matter. To arrive at 100%, we know that empty space itself must contain 70% dark energy to account for its behavior. Dark matter pulls, while dark energy pushes. We call it Dark, because we can detect it – we can measure it – but we just can’t see it.

Dark energy drives the expanding universe. Space keeps getting larger and it is believed that in the far distant future, galaxies will move beyond our ability to study them. Perhaps nature never intended for us to discover its secrets ‘out there.’

A Return to Original Unity

We seek comfort in the ordinary and yet, are attracted to the unordinary in the same way hunger drives us to eat. This game of opposites drives a type of expansion that can free the mind of its prisoner.

When we come to the realization of how insufficient knowledge really is, we can diffuse our focus, and observe life in its Original Unity without the limitations of the mind.

We can relax into life's fluidity.

The ancient consensus is that all we can know with certainty is that everything that appears – tends to disappear. This is really the only tangible description we have of Time.

British physicist, Roger Penrose, shared his ideas about what created the Big Bang: "We have a universe that expands and expands, so that all mass decays away.” Without Mass there is no Time and without Time, the universe doesn’t know how big, or how old it is.

Without Time, it wouldn’t know if it is the beginning or the end…

And what happens when all of that Dark Energy is released?

Nature might appear to hide because concealment and discovery are variations of the same thing. One cannot exist without the other and the act of searching implies concealment.

A bird isn’t the bark or the leaves just because it finds itself in a tree.

To return to Original Unity and relax into the unfathomable allows us to understand the sound of one hand clapping, where the question is actually the answer.

What is the sound of one hand clapping?

The answer can only be illuminated in the eyes.