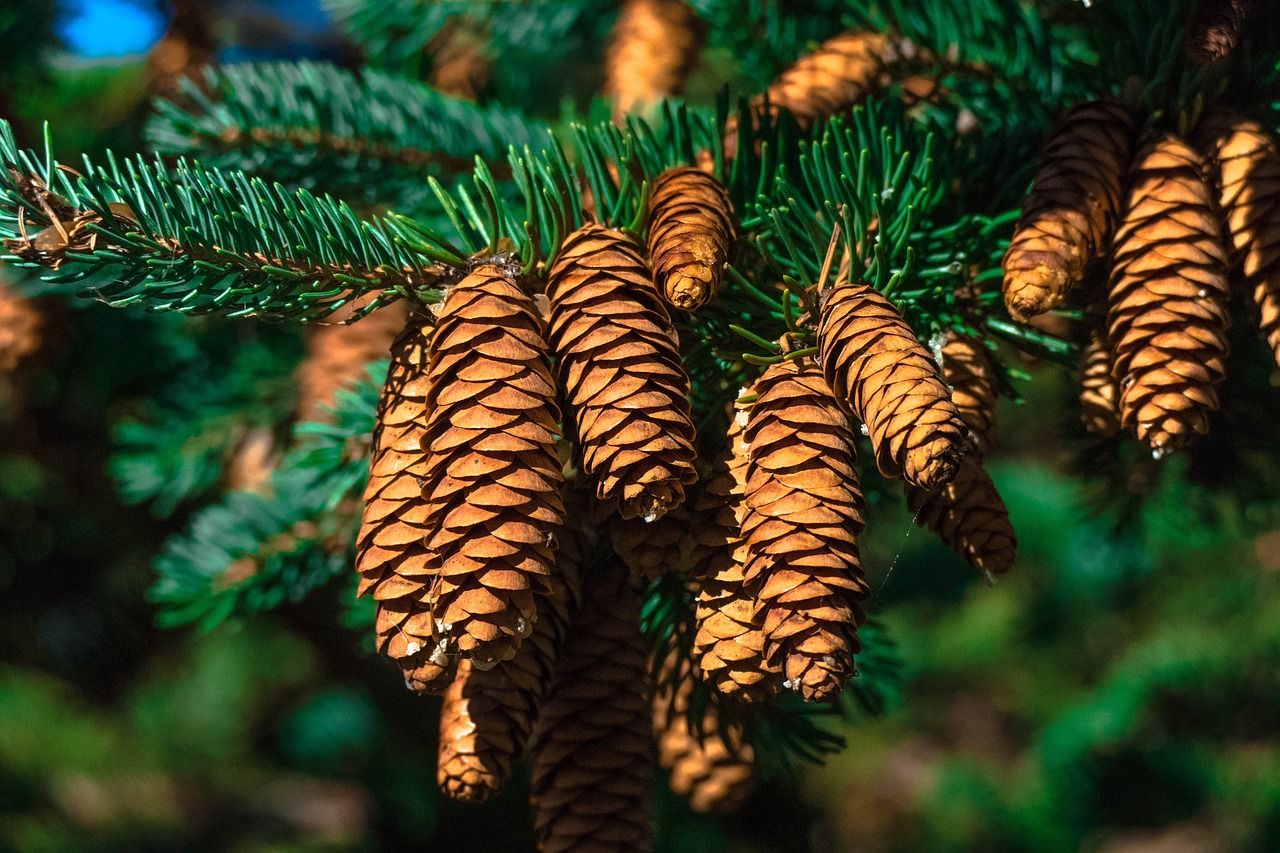 Pine trees have held a special role in our spiritual beliefs since ancient times. Over the centuries, our original ideas evolved into modern variations of older traditions.

Bringing a pine tree indoors to celebrate the holidays is a practice that has its roots in the special reverance for the pine that dates back many millenia.

The pinecone is also found on ancient stela around the world accompanied by a mysterious bag. What do these symbols mean?

Symbol of Immortality and the Divine

The pine tree is evergreen, and species like thr famed Lebanon Cedars, or Bristlecone can live thousands of years. In this way, the pine came to symbolize immortality.

While other trees drop their leaves and seem to die in the winter landscape, the pine appeared invincible. For cultures who built monuments to honor divinities, the pine erected itself and outlived many generations.

There is also a symmetry in pine trees that is captured in the pinecone. Conifer trees, or plants that have cones, are over 300 million years old.

If one species might symbolize the ever-beating and benevolent heart of the earth, it is the pine.

It’s no wonder the pine came to represent resiliency, wisdom and longevity, and their abundant cones embodied fertility. You will find pine cones featured in artifacts across the ancient world with no known contact.

The pinecone appears in the art of Mesopotamia, Assyria, Asia, Aztec and later, in Christian symbolism. Embodying rebirth, the essence of this majestic tree is captured in its beautiful and symmetric cone. Pinecones came to represent enlightenment or our connection with the divine.

The sap of the pine tree may have led to the eventual reverence of frankincense and myrrh, as later cultures found a more odiferous and pure resin to burn for religious ceremonies.

Because frankincense resin is white and forms like tears, it came to represent Christ’s death and the joyful resurrection.

The ancient tree of life depicted in ancient art, and captured in the kabbala diagram, is a pine. We know this because the Magi behind the winged and divine Apkallu hold a pinecone pointed toward the divinities.

They are also carrying one of history's most mysterious symbols: the handbag. These Magi or priests could decode messages from the divinities, reading a cuneiform text in the glowing night sky.

A depiction of the Mesoamerican Quetzalcoatl in La Venta also holds an identical handbag. We see the planet Venus depicted as the snake that disappears below the earth in cycles. In my book, Decoding the Night Sky, I examine why cultures without contact were inspired to create similar imagery.

The mysterious handbag that appears in the stela of ancient divinities comes from events happening in the sky. Cultures in Mesoamerica, Egypt and China, all measured astral phenomena to keep track of the changing seasons.

Civilizations that measured the stars and even astronomers today, use the Square of Pegasus as a starting point to find deep-sky constellations or galaxies. The Sumerians called it the Field (ASH.IKU) and it sits in between the two Pisces fish, who straddle the celestial equator.

During the solstices, the sun reaches its most northern or southern position in the sky and begins to move back toward the celestial equator. The northern fish of Pisces was believed to lead the sun in its ascent from the darkness of winter toward spring.

Within this square, the Babylonian astrologers called the Perseus constellation Sibu or Old Man. Like the Magi behind the Apkallu, Sibu means Elders, officials, and those who witness omens.

Since the ancients believed the Apkallu (ancestors, immortals and gods) lived in the sky, the ‘Old Man’ sitting in a square might allow us to understand how a square handbag relates to capturing their enlightenment. The 'square' held the key to reading the stars.

This last quadrant of the Babylonian zodiac also embodied ‘The Sea’ and gave rise to stories about wise ones who came from the sea to educate mankind.

It is interesting to note that Egyptian glyphs such as the Ibis watching over the resurrecting sun can be found on monuments in Gobekli Tepe that date to 10,000 BC.

In the image below you can see the mountains where the sun was believed to be reborn in Egypt. The Ibis, or Thoth joined Ma'at in flanking the solar barque. Above the mountains we see those handbags!

Similarly, the Pisces glyph can be found in Ratnagiri in India, which dates back to the same period. Egyptian civilization is thought to have begun in 3500 BC and astrology traces back to Babylon around the same time.

How could these symbols appear on stela which are so much older?

We think our ideas trace back to literate history, but we are unearthing similar symbolism of what can only be described as lost civilizations.

The Greeks were inspired by Babylonian astrological writings in the development of their many myths. The Romans adopted many of the Greek ideas.

In the east, Hinduism blended with Taoism to become Buddhism.

From one civilization’s dominance to the next, ancient ideas still find their way into the zeitgeist of the time.

The branches of trees mirror how nature creates rivers, snowflakes, crystals and even veins and neurons. The spiral and symmetrical design of branches reveal how nature maximizes space and economy, doing more with less energy.

Trees maximize this spiral design to tap the sunlight. The pine tree demonstrates a symmetry that allows the lower most branches to thrive. To the ancient people, it may have personified order and benevolence along with immortality.

The branching of streams maximize space to reach the widest area. The snowflake develops in symmetry because they reflect the internal order of the water molecule. However, subtle variations in air temperatures and their position determine how they grow, which is why each appears unique.

Like rain, snowflakes return moisture to the earth, but in a more conservative way. Snow can be dispersed over many months.

Like the snowflake, each of us is unique based on our genetic design and how our environment shapes us. Life only meets us halfway – the other part of the journey allows us to discover our uniqueness.

Like rivers, tree branches and snowflakes, we move toward expansiveness, augmented by the conditions we meet in the outer world.

The winter solstice was the herald of rebirth in all civilizations across the earth. Whether palm fronds in Egypt, Yule symbolism in ancient Rome, or the eventual decorated pine tree of the Germanic tribes, all were a celebration of rebirth.

The pine tree is a symbol of the balance and symmetry that leads to longevity. The world around us may change, but we can remain steadfast, centered and ever-vibrant.